The man & myself have accustomed our dirt-diggin' ways into becoming Urban Farmers: living off our land in an Urban setting. Moving was difficult, as the 223 garden was carefully tailored with irrigated raised beds & berry bushes, and we knew our neighbourhood well enough to Urban Forage apples, rhubarb, pears, plums, and other goods we did not have space to grow ourselves. Had it all... and now we must begin again. Yay?

Features:
Large lot. Full Southern exposure.
These were the selling feature of this home: more important than kitchens and bathrooms... we could change those things. Can't change location.

Original Material:
Our very nice neighbours have politely described this yard in the hands of it's previous owners as "unkempt". Sh-yeah... no kidding!
So... what to do? We conclude to mow it down, let it grow, and see what comes up. How convenient because we also ran out of money & time! Ha!

There was once care put into the planting of the perennial flowerbeds (which have bloomed surprise bouquets for our breakfast table), with medicinals and edibles among the decorative.... all which have been overgrowing with grass and weeds for 5+ years. But now we know what we inherited, and instead of bulldozing it all we will salvage echinacea, green onions, rhubarb, lilies, lavender, chives, and bleeding hearts for the bees. 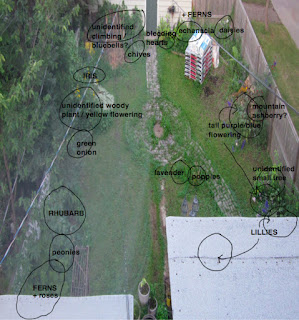 Deconstruction:
Spring 2013. Garden veggies here we come! (The delay of gratification is a cultivated skill.)

Next Up:
Now, as autumn's rosy fingers squeeze each sunrise a little later and later each day from our bigsky, we are mapping & measuring for future plotting, gathering resources, and dreaming...
Posted by Tabula Rasa at 12:22

Email ThisBlogThis!Share to TwitterShare to FacebookShare to Pinterest
Labels: Garden