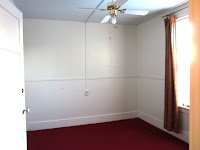 SW Bedroom:
What? How it is that you've never heard of it before?
It was fugly & we were embarrassed (same reason why you did not get to see the Master Bedroom before we ripped out the stinky red carpet and smashed up some walls). It hurts my feelings looking at the "day-we-moved-in" photos. 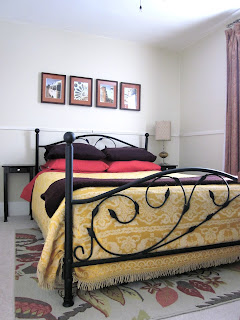 Deconstruction/Reconstruction:
Rip out nasty red carpet, exposed wiring contained, walls/ceiling patched, new contemporary light/fan installed, new Low-VOC Eco-carpet, fresh paint = 1 weekend. Whew! We're "rip" the bandaid off kind of folk. (This work was actually completed in December before the Holiday season influx. What can I say... we've been too distracted in the Master Bedroom to update the blog *wink*)

Next Up:
For now, she looks like so.
Not too shabby... considering she once was a rougher mutt.

Chair-rail, 1/4 rounds... finishings yet to occur.

Future incarnations include... a little surprise... but that's way later as far as our clock is concerned. 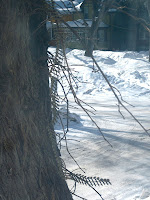 Remember when we mentioned the "emergency roof" that happened this summer? There has been a string of mishaps involved with that ordeal, setting us upon a series of unfortunate events culminating to a crescendo this February. Time/energy/funds are eaten whole by things like roofs... renovation plans too.

The Dining Room has become a temporary house for the Library, as those walls & treasures within sustained water damage (Loft also pending assessment) due to faulty business and general curmudgeonry on the account of Advantage Roofing. Turns out... there aren't a whole lot of great roofers in the greater Saskatoon & area (our 2 neighbours to the North also have had major difficulty with finding honest & responsible roofers)... now we know. Yay.

(This is the view of a discarded row of roofing nails that has been hanging off our tree since September... a testament to their carelessness I-shit-u-not.)
Posted by Tabula Rasa at 12:14