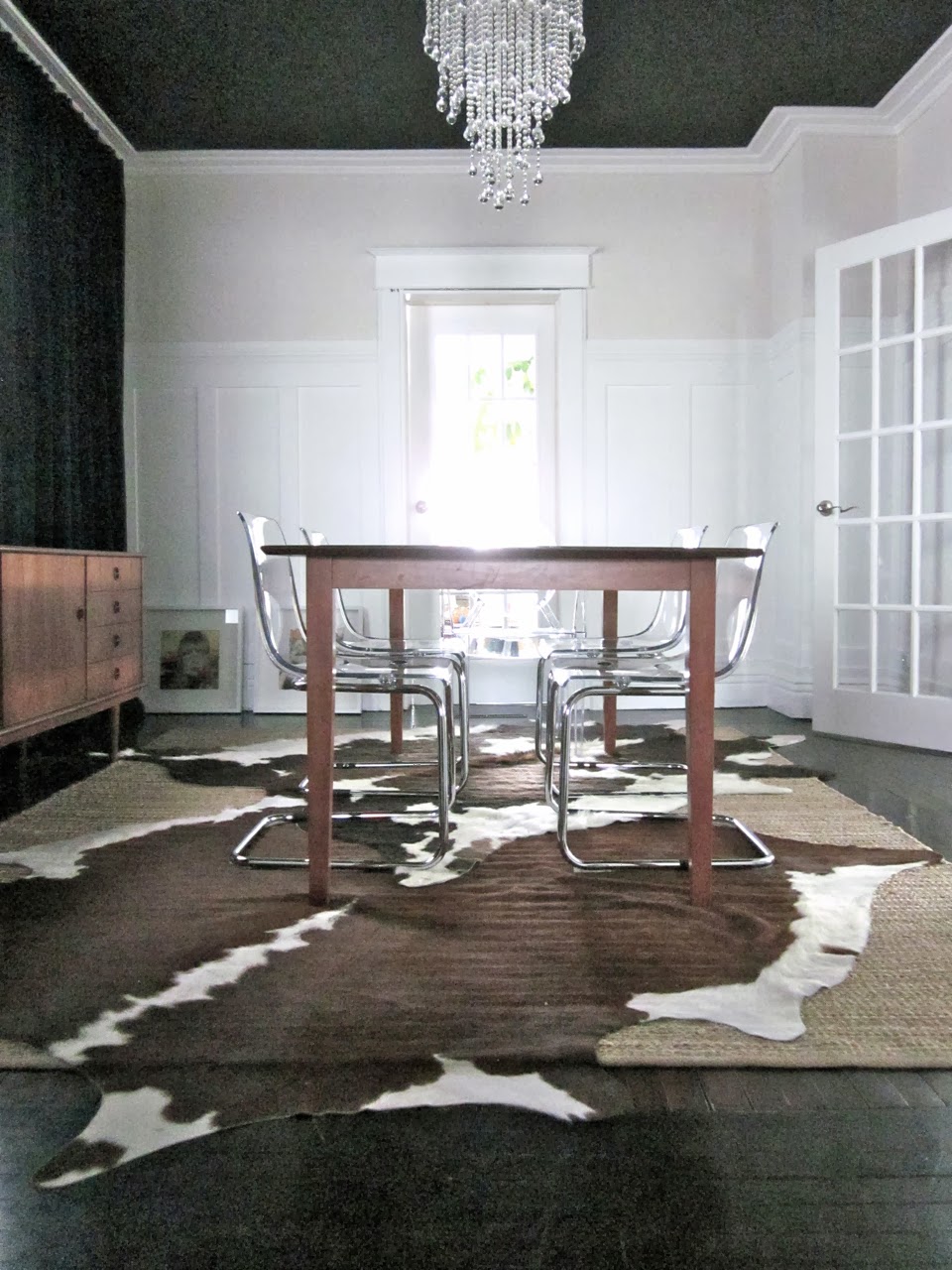 Dining Room:
Where were we with this room? Oh yah.
Well... after returning to a catch-all/hallway for a fecking eternity spell, we burned some serious midnight oil & banged her out before the Supper of all Supperz this past Holiday Season. She's lookin' a'ight.

Elements of design:
The Dining Room: featuring a large footprint with no resting walls connected to the Library (East), Living Room (West), and Kitchen (South). Working with the original hardwood floors and trims, we beefed up the panelling to a plate height wainscoting & extended the crown along the ceiling (which is painted the most absorbingly beautiful ink black matte: pop that chandelier bling!), as well as adding the subtle texture of wallpaper (nicknamed "Grandma's doiles") to bump up the lineage of the room. But we're eclectically hip, so in addition to the black ceiling, the furniture & texture of the layered rugs dumbs all that stuffy-glam down to our looser disco-zen.

The furniture:
Redwood table: with our kid's name carved into the top (a haha funny story), was the first purchase the man made for the family... so it's in the sentimental/keeper category. One day we'll refinish.
The lucite chairs were re-found (not new IKEA... used IKEA!) on Kijiji (& were a spontaneous change-up to the Wegner's currently in the Kitchen Nook) as was the MCM credenza we love. Sourcing used materials/furniture has been priority on our mandate to rehab 619 (saving planetary resources hoorah!) and it's feeling better than any *new* stuff ever has. Be a goody-two-shoes & make the jump, folks!

The curtains:
Thick, rich, and taking up 92% of the North wall. By obscuring the window-frame & extending the curtains along the wall they make an undeniable statement, as well as providing extra insulation in our winter weather.
This velvet is more of the "forest" variety of green than the "emerald" we were aiming for... so will try again when not still busy bees with this and this, oh... and this too (stay in tune for more exiting news on that amazingly cool project). Curtains are an easy & inexpensive element to change (thanks to our mad sewing skillz!) so no sweat... and we can go back to our earlier visions of yellow/teal, or make up something new like hot pink flocked damask, all on a whim to change the whole mood.


The space wouldn't be the same if not for that construction way back forever ago of moving all those weird doorways (and subsequent ducting) and punching the double French doors through the South wall to the Kitchen. By making that very expensive and essential leap-of-faith a mere few months into inhabiting 619 (breaking rule #1: do not make any drastic changes for at least 6 months), we regained natural light and an easy circular flow to the entire main floor. Sock it to ya, rules!

Future:
Paint/caulk touchups. There are still some stragglers...

Wall-art. We just can't decide yet where & what to do with our collection, so they are staying off the wall until we can decide in conjunction with the other rooms of the house what goes where... or a flash of inspiration moves us. After we settle into the space (since we moved in 2 years ago we have not been able to experience living on the main floor without construction/obstruction) we'll tweak and play with the space... changing it as we do. But the structure is there now, so ready set play!
Posted by Tabula Rasa at 12:37